To the King's most excellent Majesty


That at 13 years of age, he went into your Majesty's Navy, and served five years, which he quitted in the year 1754, peace rendering his service at that time unnecessary; and marched out under General Braddock against Fort Duquesnes, in the year 1756; that action he advanced with and fought off the colors of your Majesty's 44th Regiments, for which service the General was pleased to promise him a Lieutenancy in your Majesty's regulars; but his death prevented it.

Your Majesty's petitioner; was however advanced to a company in the Virginia Regiment, commanded several forts upon the frontiers; where he was perpetually engaged with the French and Indians; until the year 1757, when I a second time I went out against Fort Duquesnes, under General Forbes; after which, he went against the Cherokees, I was the third in Command, when Virginia concluded a Peace with Them. That your majesty's petitioner's Services, are well known to the Governor, and Council of Virginia who have expressed their approlation, by recommending him to your Majesty's principle secretaries of States; which induced him to return to England; (the Virginia Regiment being then reduced,) when unfortunately upon his payage, he was taken by the French, and lost his all he had been so many years Laboring for.

Your Petitioner most humbly prays, Your Majesty would graciously pleased to take hard services, and misfortunes in to your royal consideration, no half way being allowed. By the Colony, he being reduced to the greatest Degree of Dishefs, and either appoint him to the Command of the Lakes Erie, Huron ge' or such other Post as in your Majesty's great Wisdom, shale be thought Proper.

For which, as in Duty bound, your Majesty's Petitioner will ever pray ye;

Image of a poor photo copy of the orgional, click for a larger copy. 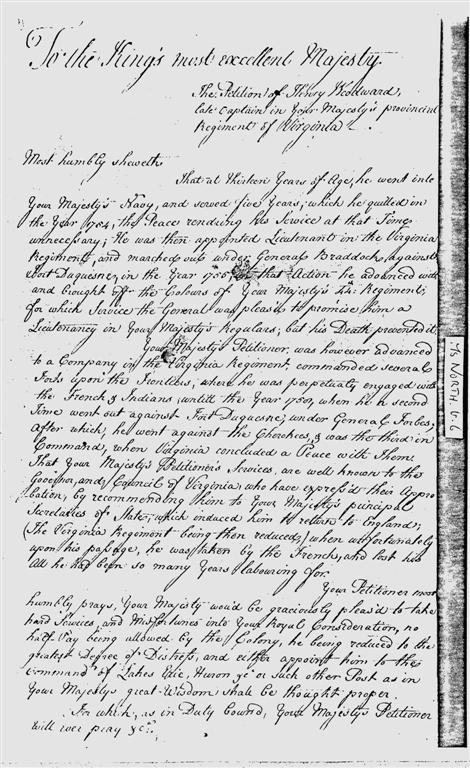